The Hollywood directors are perhaps the most reality loving personalities on the planet earth. Unlike the eastern films based around the subject of love, the focus of Hollywood movies has already been shifted in favor of the reality-based movies concerning the lives of the individuals who exist or once existed.

The latest development related to the films revolving around the real-life events is Marielle Heller’s a beautiful day in the neighborhood. Based on Fred Rogers, the film intends to shed light on the life of one of the most popular figures from the United States during the 60s and 70s.

One of the greatest influencers in the American showbiz, Fred McFeely Rogers was master at the disciplines of writing, production, and music. The mastermind behind the creation of Mister Rogers’ neighborhood, Rogers has been credited for shaping the idea of children’s television.

Particularly, a beautiful day in the neighborhood is meant to take the aged viewers back to their childhood when the said TV show was a massive hit and the children were addicted to watching it.

Marielle Heller who has put her all hard work to make the film a masterpiece has revealed her perception about the generous man.

“There was something about working on this movie that made me see it as a gift. To a greater degree than me, Fred felt the suffering of other people and the world really deeply, and it led him to do the work that he did, ” she said.

Heller further added, ” sometimes I joke that I think I’m too sensitive to be in Hollywood, or that I’m not cut out for this business, that I just don’t have the thick skin for it, but somewhere all those qualities in my life made me feel like I was the right person to make the movie about Fred Rogers because I actually felt really connected to him and the way he experienced the world.”

All the Big Names in the Cast

Known for playing a World War 2 American soldiers in Saving Private Ryan and donning A Beautiful Day in the Neighborhood Tom Hanks Tuxedo Coat, tom hanks has portrayed Fred Rogers in an attempt to make it all look real. 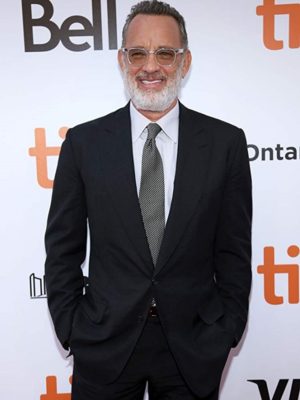 In case you didn’t know, tom hanks have always been one of the favorites of Marielle Heller. While being interviewed by entertainment weekly, the director shared her valuable opinion about the 63 years old star from Concord, California.

“He’s got a loud voice; he walks into a room and you know that he’s there! He shakes everyone’s hand, he’s really funny, there’s never an awkward moment when you’re around tom hanks. Fred allowed for awkward moments. Fred sat in silence and stillness in a way I don’t think tom naturally does,” Heller said.

Some of the other names include Matthew Rhys as Lloyd Vogel, Susan Kelechi Watson as Andrea Vogel and Chris Cooper as Jerry Vogel.

A Little Bit about the Plot

The film is based on Tom Junod’s esquire article cay you say…hero? In which the famous journalist talked about the positive impact on his life after meeting with Fred Rogers. Moreover, everything pretty much included in the film shows how Rogers used to run the children’s television show.

There were unverified rumors early in the month of January indicating that the film you are my friend is actually all about Fred Rogers’ life. It wasn’t until September 10, 2018, when the shooting started and tom hanks’ fans realized he is going to appear in another exciting film all about Rogers. As far as the budget is concerned, the makers had to pay $9 million in terms of taxation whereas the estimated budget is $45 million.

Ready to invade the cinemas all across the United States, a beautiful day in the neighborhood would release on the 8th of November 2019.