Cosplay parties bring all cherishing and happy moments. Also some good recommendations and suggestions for some really good movies and series. It is also a really good source to satisfy your fan moment. And to display your attachment to your favorite character, movie or some series. Maybe your picture goes viral on social media when you post it in the cosplay costume with the hashtag. This is such a nice idea to promote harmony among like-minded people. And to promote some really nice artworks of the film industry.

SQUID GAMES – A MAGNIFICENT HIT OF THE YEAR

The famous and the most hyped television drama series named Squid Games is a Korean survival drama series. A survival drama series is one where characters make efforts to physically survive out of some crisis. The drama series is nine episodes long. Squid is originally a traditional children’s game in Korea. It varies in its name and playing habits with respect to regional differences. The name of the game is so because the ground board of the game drawn resembles the shape of the Squid. A squid is basically a fish or a sea creature. Geometrically, if we separate the parts of the squid ground board, we will have three shapes. And those three shapes are the parts of the Squid Game Outfits.

The series starts when the 456 players, who were very deep in financial crisis, took part in a game. They all risked their lives because they had no other way out. The players were invited to play a series of children’s traditional games, including the one named Squid. And the winner would get a huge monetary amount as the prize. The idea of the series was to depict the economic inequality in South Korea. And the struggles that the writer of the series lived while being a part of a capitalist economy. The series and the Squid Game Outfits receive immense attention along with criticism from all over the world, making it the most-watched drama series. 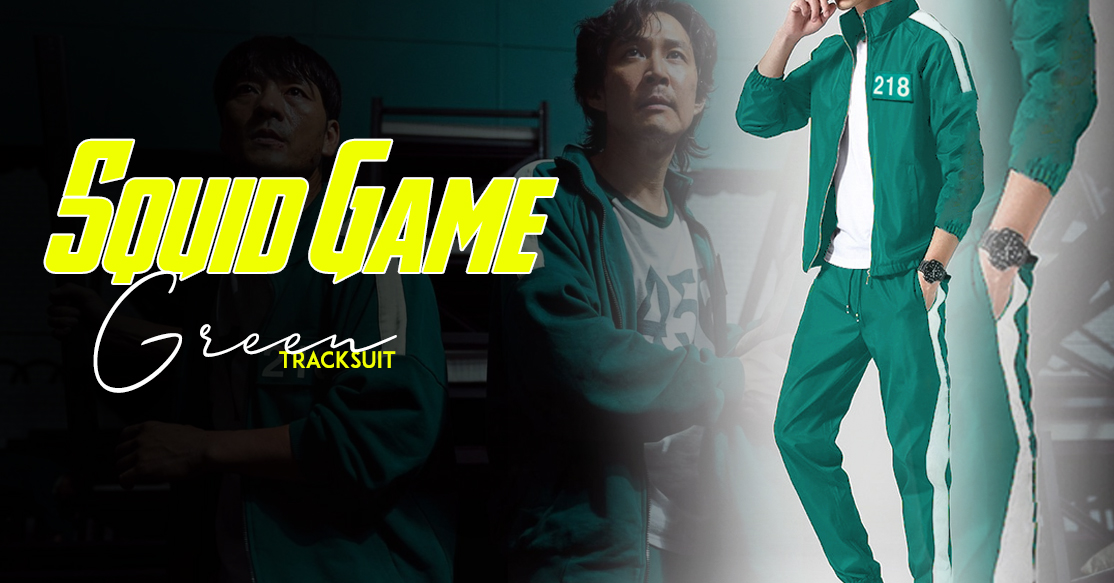 A green-colored tracksuit was the costume of players when they were first brought into a dormitory in a huge number of 456. All of those were deep in debt and miserable. Nobody was recognizable by any other means of identity, except for the numbers written over three places on their tracksuit costumes.

GOING DEEP INTO THE FEATURES OF THE TRACKSUIT

The tracksuit costume breaks into three pieces. A jacket, an inner t-shirt, and trousers. We have brought for our customers who are deeply in love with the drama series, the tracksuit jacket along with trousers at our store from where you can get it all easily. Squid Game Tracksuit Costume is green in color, the same as it is shown in the series. It uses a poly-cotton fabric in its making of the upper layer along with a viscose inner lining inside the jacket for your comfort and ease. The jacket has a fastening zipper installed for closure at the front, and it has a smart stand-up style collar. Other cool features of the jacket include fine and nice rib knitted cuffs and a pair of waist pockets. There is also a hidden but accessible pocket inside the jacket. The trousers use the same material and are of the same color as in the series. These have a broad white stripe alongside the leg. The ankle cuffs are nicely rib knitted.

AN IDEAL WAY TO WIN THE JOGGING SCENE

The Squid Game Tracksuit Costume is a nice choice to wear on bright shiny mornings when you go out for a walk or a jog. People all the way long to the park and in the park would stare at you with complimentary gazes. This outfit will make you stand out on the jogging track. Not only for your routine jogging, but you can also wear this costume tracksuit to some cosplay party too. Let the people know about the amazing series. Combine a pair of white leather low-top sneakers to complete the jogging outfit stylishly. 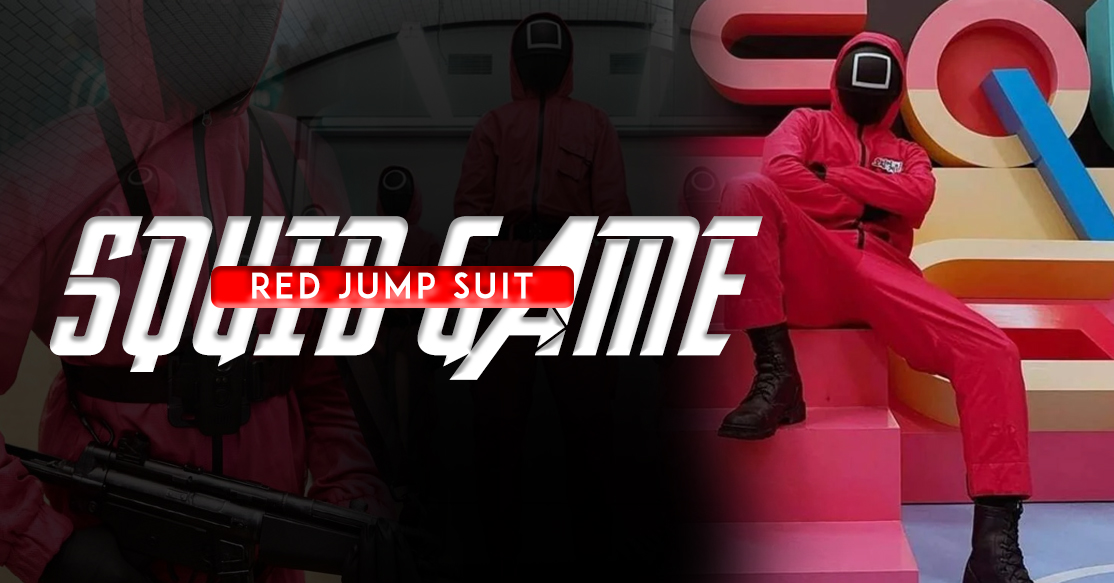 The haunted and bizarre red-colored jumpsuit was the costume of guards. It was the same for all the guards, but the shape on the mask differentiated the functions and duties of the guards. It is all fun watching such an intellectually well-scripted movie or series. Those guards were actually the staff of the game setup, and they were bringing the contestants into the dormitory and explaining to them the essentials of the game.

The Squid Game Guard Jumpsuit is not your ordinary jumpsuit. It is a legit cosplay costume. It is red in color. You could be direly in need to have this one for the upcoming cosplay birthday party of your friend where you might be guarding the game. It is a hooded jumpsuit with a front zipper closure and a belt tied at the waist. It also offers a flap pocket styled at the font on the chest of the jumpsuit.

Though this jumpsuit costume can be best styled at a cosplay party, it can be re-engineered for any other purpose, such as girls may make it into a female one for a character day at their high schools. This would need all the essentials of the costume like the costume itself obviously along with black gloves, the face mask, its outer cover, the strap, and the belt. For a re-engineered female look that should be sassy and saucy, too, you may skip the mask stuff. Adding some hotness and boldness to the costume, try wearing a pair of shiny black leather heeled long boots. Keep the zipper of the jumpsuit a little deeper so that it would be a perfect re-engineered Squid Game Guard Jumpsuit for females.

THE CHARCOAL GREYISH BLACK LONG COAT OF THE FRONTMAN 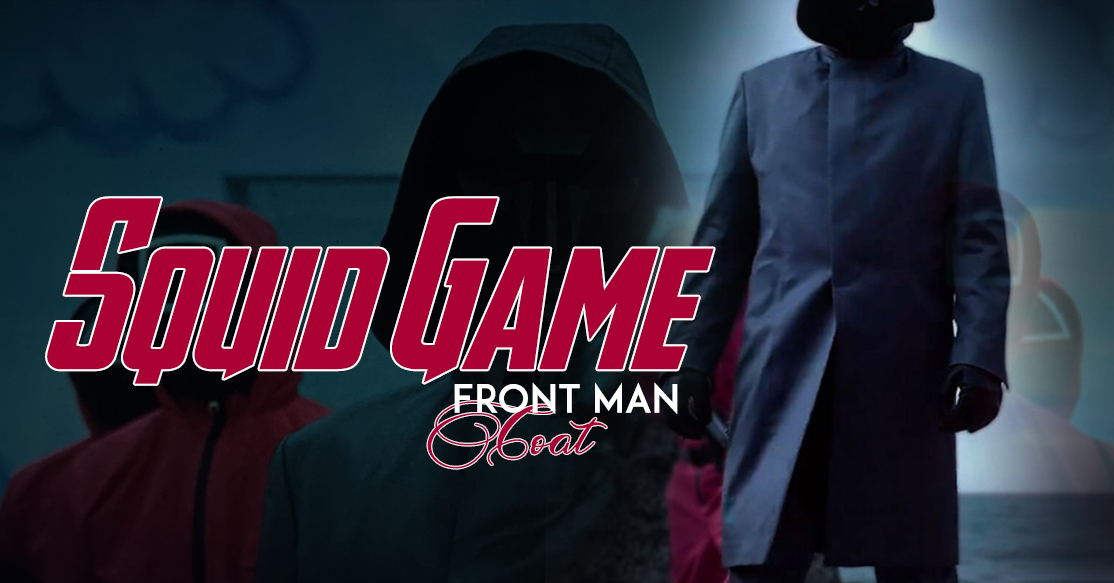 All fashionable and the most stylish outfit of the series Squid Game is the Squid Game Frontman Coat. The frontman was basically the organizer and the runner of the game in the series. He was actually a secondary antagonist in the series Squid Games who was trying to give every single being an equal chance to fight their way out of the financial crises they were deep in. The Front Man tried to fight the inequality-based Korean economy and the capitalist system of South Korea. He considered each and everyone, no matter from which social class, an equal contestant and the player of the game.

EXPLORING THE FEATURES AND FUNCTIONS OF FRONTMAN COAT

For the Front Man’s loyal and crazy fan base and the series named Squid Games, we have an auspicious bounty in the shape of Squid Game Frontman Coat. We brought it to our store for the easy disposal of our esteemed customers. This charcoal blackish-grey long coat uses cotton fabric overall and an inner lining of viscose material that is stitched for the comfort and ease of our esteemed wearers. Other attractive features of this coat include a hooded collar, buttoned closure, and a pair of waist pockets styled at the front of the coat. There is a pair of hidden pockets too that is stitched finely inside the coat. All the pockets are accessible and add to the function of the coat and provide a great deal of convenience for you. This coat is a real epitome of fineness and boldness. It is an artifact of beauty and completeness. This chic piece of art is prepared in the hands of our craftiest and skilled tailors who put their energy and soul into it.

MAKING THE MOST OUT OF THE CHARCOAL GREY COAT

The greyish-black colored Squid Game Frontman Coat is no doubt a perfect freaking cosplay outfit. It can be utilized at Halloween parties too. However, for the style hunters and trendsetters, it is not difficult to create new styles out of this coat. In fact, this coat is all neutral and universal. You can use it in both formal and casual outfit combinations. For example, you can combine it with a white dress shirt, a dress grey vest, and dress pants along with black leather double monks. This is all a nice and classy formal look for your office and formal parties too. For a semi-formal look, you can team it up with a high neck or turtleneck sweater and skinny chinos along with low-top leather sneakers. You are all set to go to a hangout or a lunch date.

The series Squid Games is worth watching on repeat. It has some well-structured realities of the societies that need to be thrown the light on. Apart from the story and plot, this series has given us a number of wonderful cosplay costumes and ideas.