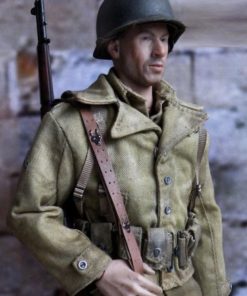 Saving Private Ryan is the best war movie since 1998, the portrayal of the Niland brothers was very heart-whelming as the film follows United States Army Rangers Captain John H. Miller and his squad as they search for James Francis Ryan, the last surviving brother of three servicemen killed in action. The fashion from the movie is nothing more than the US Army Uniforms from World War 2, as throughout the film the attire of Private Caparzo, was the most admired as he was the highest rank soldier from the squad.

The attire is made up of corduroy along with the inner viscose lining making the outfit more durable and adds comfort to the outwear. The Saving Private Ryan Private Caparzo Vin Diesel Jacket features a lapel collar along with the front buttoned collar gives a chic vogue to the outfit. Just American Jackets proudly presents you the most patriotic attire from the most nationalistic movie of all time.