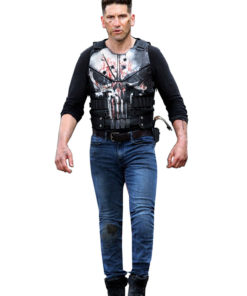 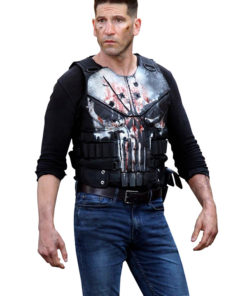 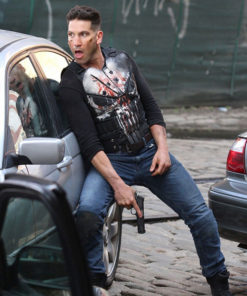 Get Extra $20 Discount on All Orders

Frank Castle is a savagely violent character in the film ” The Punisher ” as anger becomes his power after his family is murdered by a secret group of criminals. The depiction of depressive as well as a brutal character has enabled us to introduce Jon Bernthal The Punisher Frank Castle Black Leather Vest to the customers.

An output of real leather material, Punisher Black Vest has become the most demanding outerwear of the season. It’s the set of unmatchable features that make it so special allowing the wearers to be at ease. There is a lining of viscose fabric dominating the entire interior of the attire. Furthermore, the white skull picture at the front clearly indicates its association with the cruel character. Since it has been made with the simplest approach, only one pocket has been added to it for the wearer’s feasibility. Unlike a jacket, a vest is always collarless which makes it cooler and allows an easy movement of the neck. The Punisher Jon Bernthal Leather Vest comes in a black color to specifically meet up the needs of the men in black.