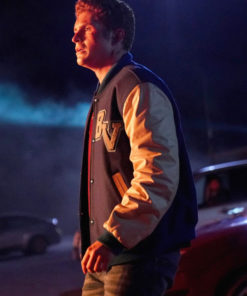 The rise of a new superwoman is here with the first season of TV series called Stargirl. Starring the young generation of actors, Stargirl has already stared setting recent fashion trends among the teenagers influenced by the show. Among them, Stargirl Henry King Jr. Jacket is currently the talk of the town.

Inspired by the young American idol Jake Austin, this outerwear has a unique style and color. The jacket suited the actor as well as the character’s sporty vibes. TV Series Stargirl Jake Austin Walker Jacket comes in vivid blue color with white sleeves and simple appearance. The premium quality fabric used in its making assures its worth. It guarantees its life, the subtle look of this outerwear adorns the wearer with unforgettable class and eye-catching appearance.