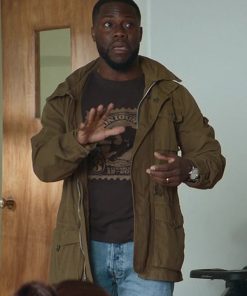 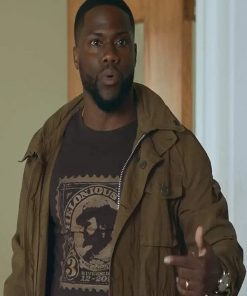 Kevin Hart is the comedian who played a non-comedy role in his new movie Fatherhood. The well-known comedian, actor, and producer played the role of Mattew Logelin in this movie. In this movie, Kevin Hart’s character got jackets with almost all the outfits. In which the most eyecatching one is the Kevin Hart Fatherhood Brown Cotton Jacket. It gathered all the attention and views from the audience.

The Kevin Hart Fatherhood Brown Jacket is pure cotton fabricated, which has a viscose lining attached as an inner for warmness and comfort. This jacket has a two-layered front closure that makes it more attractive. The first layer is of button closure, and the second one is of the zipper fastening closure. The brown cotton jacket has a two-layered standup collar with an elegant look. The jacket has four outside pockets for storage which gives it a buggy look, and two invisible inside pockets. Just for the most creativeness, it has a buttoned cuff that looks flawless. The brown cotton jackets give the vibes of a soldier’s uniforms.