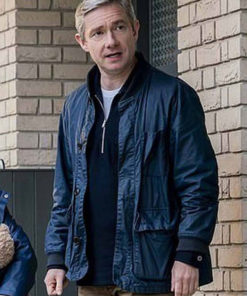 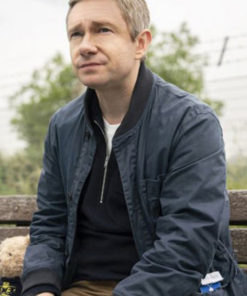 Who says men in their 40’s cant look younger than their age, especially with the Breeders Paul Blue Bomber Jacket on the back. Martin Freeman, the 49-year-old English actor, is known for his role as Paul in the series Breeders. He looks at least 10 years younger than his age, JUST because of the jacket he wears. Martin is an Emmy award winner and has done at least eighteen tv shows, fourteen theatre productions, and many radio productions. He is the co-creator of the series too. The Breeders Paul jacket is elegant, stylish, AND sassy!

Its made out of satin fabric with a viscose lining inside. It has a buttoned closure on the front with a rib-knitted collar. It is blue in color with full-length sleeves. There’s a total of five pockets, three on the front and two inside. It can be worn over a jumper or a t-shirt, as Paul portrays during the course of the series. Basically, it’s universally flattering.