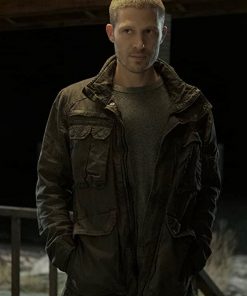 As if the actor and the series were not reason enough to get the Zach Gilford Black Jacket, the jacket itself is very useful too. The jacket comes in a cotton fabric on the outside and has viscose on the inside. It has a zipper closing that is accompanied by buttons and ends with a round collar. The color of this attire is one that shifts with the light. It has four pockets on the outside and two on the inside. The jacket is perfect for the man who prefers to have his belongings with him wherever he goes.