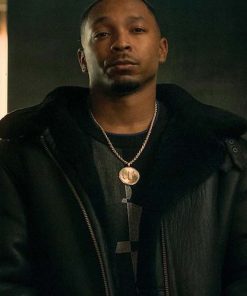 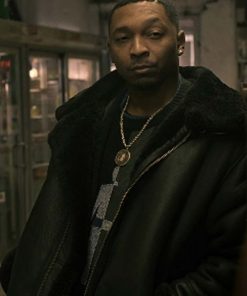 The series power is all about finding your identity. The series is full of characters who have tumultuous personalities but try to make peace every now and then. The Malcolm M. Mays Power Book III Lou-Lou Black Leather Jacket is an attire that shows off the dominating vigor of Malcolm M. Mays. the actor is also a musician in real life and has been known to co-direct his own short film at the age of seventeen. He has been known the most for his in sync fashion.

This actor has previously targetted issues that arose between Latin Americans and Black Americans. This is one of the reasons why the Malcolm M. Mays Shearling Jacket has collected all of its reputations. The pure leather jacket comes in a smooth-looking black. The inside of this jacket is made with a viscose lining. The lapel-style collar of this jacket is coated with black-colored shearling. The jacket has a total of two pockets on the outside, and the inside holds two pockets too. It has a zipper closure on the front.